Over breakfast recently I had the opportunity to talk to Brandon Hutcheson,  CEO of the Aware Group. Brandon told me their 17 person company is the fastest growing artificial intelligence consulting group in New Zealand. He shared a little of their history and plans.

Brandon is a serial entrepreneur, having being involved in two successful exits with Cheaphost and Dvelop IT.  The Aware Group got their start in 2016 after successfully winning the Microsoft Excellence Award in Technology Delivery for a tertiary business intelligence implementation. This includes predicting things like student drop out rates (a task Jade had told me they have been working on too) , student prediction,  and  measuring tutor performance. This platform is now being used by various New Zealand tertiary institutions.

They’ve developed their machine vision capability across various projects, including counting and classifying traffic (cars, trucks, vans, bikes, etc) for Local and National Government.  They’ve also put this technology to use to count students going into tertiary classes. The next stage for their product release is the use of facial recognition to identify who is in the class but they don’t feel that we are socially ready for this level of implementation. Their growing data science team is not reinventing the wheel. Where possible they’re using existing models and tweaking them to meet the needs of their project. They’re using Microsoft technologies and are a strong Microsoft partner.

The newest AI capability they’ve developed has been around natural language processing. This has been supported by their recent entry into the Vodafone Xone incubator. They’re applying this technology to understand customer support calls and attempting to surface relevant articles from an internal knowledge base. These articles could help to answer the support call more efficiently, but also to up-sell the customer on relevant services more effectively. This product is currently under development and is being tested in a call centre.

Probably some of their highest profile work has been in demonstrating AI concepts, often in partnership with Microsoft. Some of these are quite quirky, including: 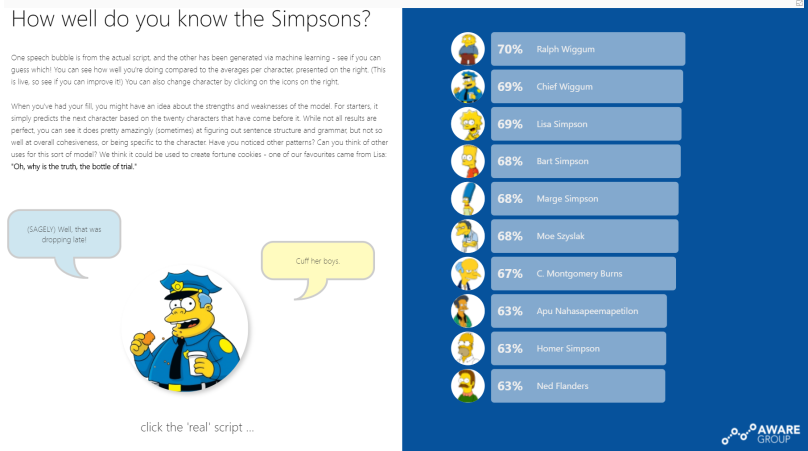 On the business side, the Aware group are getting most of their revenue from service contracts with an increasing growth in product-based revenue. They have bootstrapped to date, but are preparing themselves for a capital raise.

One of the challenges Brandon is facing is finding good quality AI practitioners.  As well as their team of 12 in Hamilton, they have 5 people based in Seattle and are planning to expand in the US market. They are also eyeing opportunities in Australia, Japan, Israel, and Korea.. With customers in sectors as varied as education, government, large corporates and agriculture, my main advice to Brandon was to focus their small company geographically and within a single sector so they can benefit from getting known within a niche.

The Aware Group was recently acknowledged as a rising star by Deloitte as part of their Fast 50 awards. I’ll be following to see how far and fast their star does rise and wish them all the best.